Easter Island, located in Chilean Polynesia, is considered the most isolated place in the world. However, despite the distance, tourism on Easter Island is in high demand.

A mysterious halo surrounds this island that has more than 1000 moai, giant stone heads that rise from the earth and maximum exponents of the ancestral culture of the Rapanui, an ethnic group that originally inhabited this land. These first inhabitants arrived sailing from Tahiti in the 19th century.

The discovery of the moai gave rise to numerous unresolved hypotheses. Recent archaeological work confirmed that, beneath the heads and torsos of these stone giants, their bodies were buried in the earth.

According to The New York Times, an estimated 100,000 people flock to the island each year to visit its famous moai heads and feel a little closer to history, as the island was first settled in the 12th century.

A complex culture developed on this island, whose spirit is still alive in its inhabitants, their language, clothing, handicrafts and food.

The Tapati festival takes place every February, a two-week festival whose heart is the Rapa Nui traditions. Its permanently warm climate, the tranquility of the surroundings and its beauty make you always want to return to this magical place.

Evolution of Tourism in Easter Island

Tourism on the island began in 1966 with the opening of the airport, and has continued sporadically over the last 40 years. In 1966, the Easter Island National Tourist Park was created under the direction of the Ministry of Agriculture.

Subsequently, in 1972 the management of the area was assigned to the National Forestry Corporation and in 1976 the first management plan was elaborated.

In 1993, the park was expanded to 16,460 hectares, but the islanders’ demand for agriculture created a reserve of hectares and the protection of 17,600 hectares in 1999. Since the inception of the tourism industry, the government has put forward numerous proposals, including the development of tourism zones.

Tourism on Easter Island is considered an important source of employment and commercial activity for the future. Tourist accommodations range from US$60 to US$120 per day.

Rapa Nui does not have a shallow coral reef to supply fish, so the only option was to use a large cay to spear larger fish such as porpoise and tuna. RapaNui is the only Polynesian island where rat bones outnumber fish bones in the excavation of archaeological dumps.

Tuna is regularly fished off RapaNui’s coasts, as well as other species of smaller fish and sea urchins.

Eels of different sizes are caught in the cracks and crevices of the coastline, as well as flying fish, bonito, albacore, rays, dolphins, porpoises, sharks and swordfish.

Many things to see – Tourism in Easter Island

If the mystery of caves is your thing, then head to the site of Ana Te Pahu, home to so many caves within walking distance of each other.

Remember to bring a powerful torch; it can get very dark in there! If you love swimming, don’t miss Anakena beach, which is very close to the moai sculptures and adorned with swaying palm trees.

If you prefer to explore below the surface, there are local dive centers that will guide you to some of the most impressive subway water features.

Ovahe beach, surrounded by reddish volcanic cliffs, is known for its fine pink sand, the result of a mixture of volcanic scoria and eroded coral.

What is the best time to visit Easter Island?

This festival is perhaps the ultimate showcase of Rapa Nui culture, with a representative from each family competing in different challenges, from physically demanding demonstrations of skill to handicrafts and dances.

On the penultimate day of the competition, all competing participants, their families and even tourists join a parade through the streets of Hanga Roa, where everyone is dressed in traditional costumes and accompanied by Rapa Nui music and dances.

The culmination of the events takes place on the last day when the two winners of the previous activities are crowned as the King and Queen of Tapati.

However, these two weeks may not exactly be the best time to go to Easter Island.

Well, first of all, you can expect flights to increase dramatically during this period and you will need to plan ahead for accommodation and bookings (we’re talking months in advance) if you want the opportunity to see the festival.

Secondly, while it is a once-in-a-lifetime event, it is expected that many of the services on the island, such as restaurants and even hotels, will be closed as families focus on the competition.

Where to stay – Tourism in Easter Island

One of the highlights of tourism on Easter Island is its collection of eco-lodges.

Hangaroa Eco Village & Spa is conveniently close to the main village of Hanga Roa and features construction inspired by the ceremonial village of Orongo.

The resort features a stunning outdoor pool, a luxurious spa and a fabulous list of activities including beach visits, biking and hiking.

It is an ideal option for travelers who like to combine fun and adventure.

Also highly rated is Mike Rapu’s Inn, located in the middle of a nature-filled paradise with trees and meadows, and with a panoramic view of the Pacific.

This resort offers a variety of programs that focus on wellness, archeology and photography.

Tip. The island and its people are notoriously closed to foreigners and it can certainly be difficult to get residents to talk openly with you. However, most of the guides are very welcoming and very happy to talk if you show interest in the Rapa Nui culture. Spanish is very useful here, as few people speak much English. 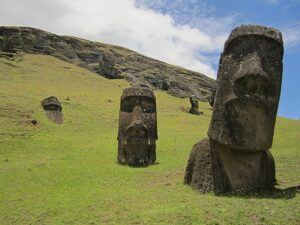 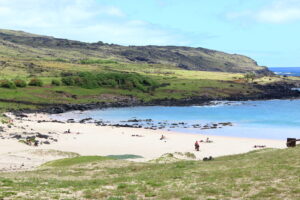 Named Easter Island after the Dutch explorer Jacob Roggeveen, who saw it for the first time