Iguazu Falls, are waterfalls of the Iguazu River located on the border of the Brazilian state of Paraná and the Argentine province of Misiones. The falls divide the river into the upper and lower Iguazu.

Their name comes from the Guarani or Tupi words y (IPA:[ɨ]) (water) and ûasú (IPA:[wa’su]) (big). Legend has it that a god planned to marry a beautiful aborigine named Naipí, who fled with her mortal lover Tarobá in a canoe. In rage, the god sliced the river creating the waterfalls, condemning the lovers to an eternal fall. The first European to find the falls was the Spanish Conquistador Álvar Núñez Cabeza de Vaca in 1541, after whom one of the falls in the Argentine side is named. The falls were rediscovered by Boselli at the end of the nineteenth century, and one of the Argentine falls is named after him. 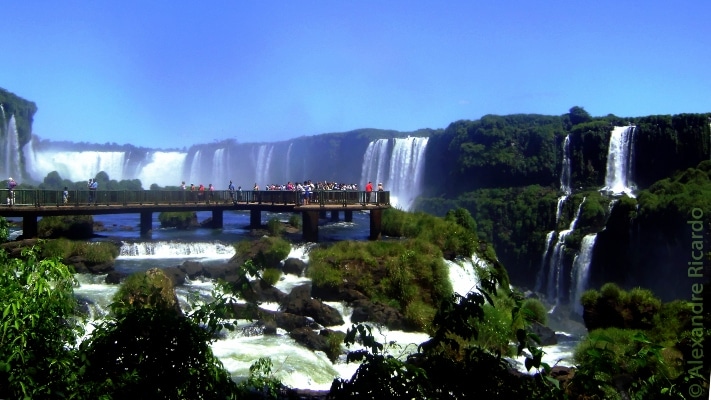 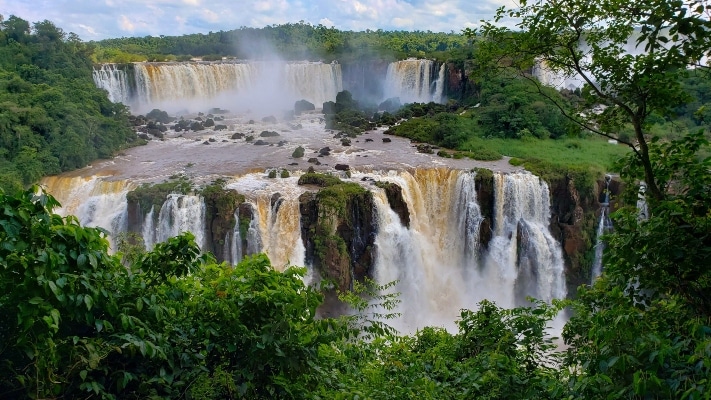 Where are the Iguazu Falls 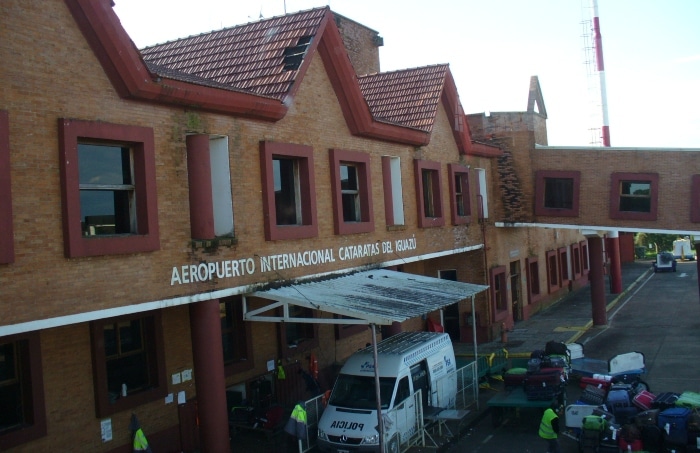 The Iberá Wetlands are a mix of swamps, bogs, stagnant lakes, lagoons, natural slough and courses of water in the center and center-north of the province of Corrientes, Argentina. The Esteros are the second-largest wetlands in world after Pantanal in Brazil. They are of pluvial origin, with a total area 15,000 to 20,000 km². Since 1982, the wetlands are part of a protected area (the Iberá Natural Reserve), which comprises 13,000 km² (14% of the surface area of Corrientes, the largest protected area in Argentina). Iberá is also one of the most important fresh water reservoirs in the continent.

The Natural Reserve is known for its biodiversity, including four species that have been declared “provincial natural monuments”: the neotropical river otter, the maned wolf, the pampas deer, and the marsh deer. It is also home to the two Argentine species of alligator, the Yacare caiman (yacaré negro) and the broad-snouted caiman (yacaré overo), as well as the capybara (the world’s largest rodent) and about 350 bird species.

San Ignacio Miní was one of the many missions founded in 1632 by the Jesuits in the Americas during the Spanish colonial period near present-day San Ignacio valley, some 60km south of Posadas, Misiones Province, Argentina.

The original mission was erected near the year 1610 by priests José Cataldino and Simón Maceta in the region called Guayrá by the natives and La Pinería by the Spanish conquistadores in present Paraná State, Brazil. Because of the constant attacks of the Portuguese Bandeirantes, the mission first moved in 1632, and didn’t settle in its current location until 1696, and was called San Ignacio Miní (minor in Guaraní) to distinguish it from its bigger homonym San Ignacio Guazú (great).

In the 18th century the mission had a population of around 3000 people, and a rich cultural and handicraft activity, which was commercialized through the nearby Paraná River. Nevertheless, after the Suppression of the Society of Jesus of 1767, the Jesuits left the mission a year later, and the mission finally destroyed in 1817, as well as other missions in the area.